Yesterday, I flipped through my journal and found the section of doodled faces. I wrote this draft based on the drawing. 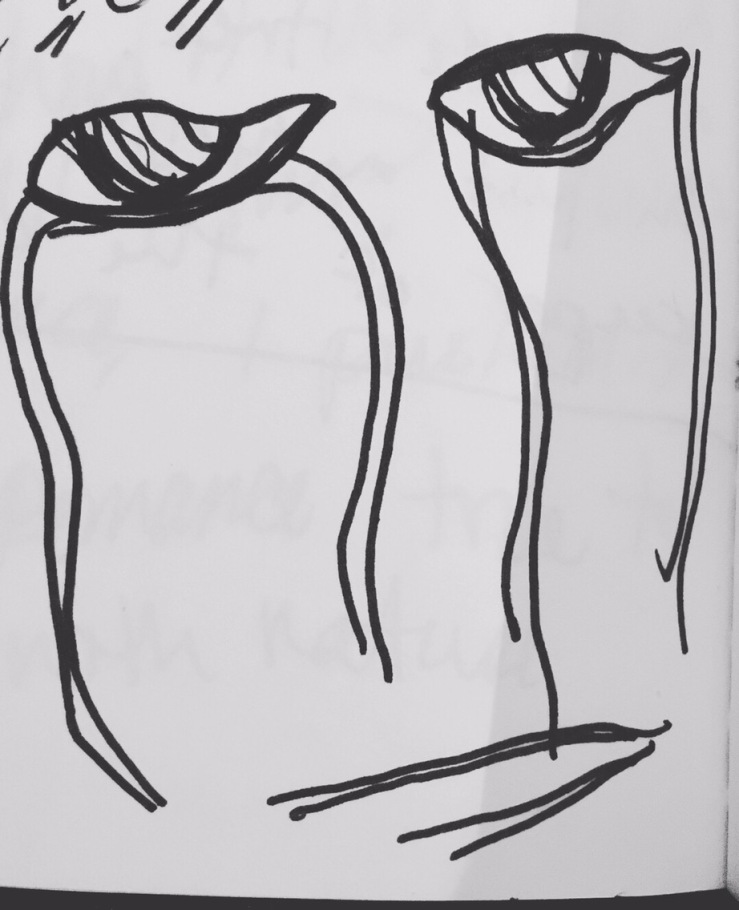 In the dark they called me Moonshine.
That liquor in a glass jar.
Holy water.

They baptized me in hogwash
made in someone’s basement’s rusty sink.

Moonshine they say.
Not the boozy white reflection
on a wrinkled black lake.

Moonshine.
Back alleys.
The kind you shout mistakes at
Your footsteps echo in the rain
Someone pees in the corner.

I could be the summer sunrise
The painted lake
Gulls in the sky.
My own name.
But I’m stuck as the hooch.

1.
you are warmer than fever in
me that was
the wing-ed beast
of legend in
me for
a moment that soft
pressing
every where I felt
light
sun
it was how light
is so fast and
blind to itself.

2.
Holy shit. My body is made from cheese. I’m cheesy. So much so, in fact, that the Earth’s gravity will let go of me. It’s happening tomorrow. The moon will take me. I’ll stick to it like bird shit on the bench you’re trying to sit on.

The Moon. The Mothership. A whole giant rock made of Me. I’ll throw the man on the moon a retirement party. He’ll ask what the final straw was that made the Earth eject me. I’ll show him part 1 of this poem and he’ll say that’s not so bad. Watch this.

Don’t Look Inward Whatever You Do
Doug said to look inward
but it’s winter there.
He doesn’t know I can swallow a whole snowman
and my belly stays fat until I go to the equator.

The doctor put a stethoscope on my chest and said
she heard a black hole purring.
I worry science doesn’t know whether
one comes back from that.

Who knew Dr. L was also a court stenographer?
She said Quiet Let Me Dictate
I said Sure and heard
“I know you in the black.
In the caves between pixelated dreams
I can steal you anytime”
I said Shit Doc What Do I Do
and she was like
“don’t call me Doc”
so I said, “just tell me how to fix this”
and she hypothesized
“if the core of your persona grows in a terrarium
you should drink 3 buckets of water a day for a week to drown any evil roots”
I don’t know where she got “terrarium” but long story short
NASA’s bringing me down to Huntsville, Alabama on Thursday
which is very far away from Doug.

Today I’m arranging my poems for the grant I’m applying to. Since I need to take my eyes off of the computer screen anyway, I figured this would be the best way to go. This method is much easier than having to fuss with Word layouts and page breaks and I can see it all at once without having to zoom in or out. Everything is right here! Plus, it’s cool to have physical representations of your work. They’re so tiny when you print them out!

I’m sorry but I can’t write a poem for you. There was nothing beautiful about your death I wasn’t even there, I heard about it on Snapchat when our buds were at your wake & thought how fuckin lame is my relationship with my friends that I’m the last to know & then I thought you’d give me a big ole smack of words, you destroyer, for making your absence about me. I can’t write about it, I’m sorry. Every literary device I throw down sits in my mouth like raw garlic & nothin’s sweet or sour, Madrugada. What’d you do when they told ya? look in the mirror & tell your brain “you bastard”? look at your hands & wish they could fish hook it out of your skull like a scab? Did you deny your body’s betrayal or did you find it consistent? I can’t put it together. You know when the chemistry teacher says a gas will expand to fit its container? It’s just like that. All I wanna do is turn these poetic particles into liquid so at least they’d flow like the rushing stream of your memory but I’m all dried up. All I could do was pour Bacardi down the sink, I gave you two shots but didn’t tell because my roommate was callous and would hound me for wasting alcohol. I thought about you in Malaysia during a sunrise & spoke your name, La Madrugada Roja. You died seven months ago but this is the best I could do.

your mouth is full with the honey of my language
yes, it’s Crimson and Clover
dripping over and over

I’ve been on the road for two weeks without doing laundry anywhere but the sink.
I brought a white flowy tunic specifically for Arizona.
Now the cuffs are tan in Denver.
my laptop clicks when it opens and I wince because I’ll need a new one,
but I gave my money to the waiters in Tempe.
I’m drinking Folgers in a borrowed mug,
thinking about Minnesota.